Dan Briggs passed away on Tuesday, December 1st while recovering in northern Idaho from complications caused by a fall and subsequent pneumonia.

His daughter-in-law, Nicole Briggs, said that he frequently spoke of his life and career at Flying Tigers of which he was very proud. She wanted to share this with us. 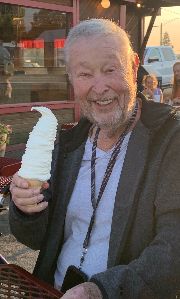 We do know that he did an internship for 6 months before he was hired with Flying Tigers but his actual hire date was 9/18/61. Flying was his life and he spent many hours building his own planes. His greatest accomplishment was the completing of his T-34 airplane he built with one of his greatest friends, Larry Chase. He had a great love for politics as well! He looked forward to his Tiger lunches and reunions. He was very proud of his Captain's title and wore it proudly!

One more thing is right before he went into the hospital he sat on the edge of the bed and looked at his Captain's license for awhile and put it away and said okay we can go now. It was almost like he knew it could be the last time he got a good look at it one last time.

Dan was preceded in death by his beloved wife,Judy and his daughter, Jan. He is survived by his children Kevin (Jamie); Steven (Nicole) ;and his grandchildren Cole, Joshua, MacKenzie and Gage.

I crossed paths with Dan Briggs in the March of 1960. I had been hired at Stewart Air Service at Hawthorne airport as a new copilot in June of 1959. I was hired to fly copilot on a DC-3 which I had never done before. Two months later Dan Briggs was hired for the same job and to be a friend of mine for the next sixty years. We were two of a total of ten pilots who flew for the company Stewart Air Service. The core business of Stewart's was a contract with the Douglas Aircraft Company flying their employees to the different Douglas facilities in the Los Angeles area and also to Palmdale and Edwards Air Force base as well as Vandenburg Air Force Base. During the racing season in Del Mar we flew people to the Del Mar airport so they could attend the horse race's there. We flew a lot for the two years we were working for Stewart and we saw each other often. Dan was a friend that you never lost or forgot. He was glad to see you even if it was two weeks later or just a day later it didn't matter. He always had that smile of his and a warn hand shake. We flew a lot of charters as well, such as Les Brown and his band and during the summer moths of the Forrest fires in the country we flew for the Forestry Service. Needless to say we weren't home much so we saw each other in places such as the Del Mar airport or in Lewiston Idaho after a long flight from New Mexico carrying hot shot fire fighters to a fire.
In September of 1961 I saw an add in the Los Angeles Times for pilots being hired at the Flying Tiger Line in Burbank California. I knew of the Tigers because one of the other pilots at Stewart's was J. K. Murtay (Jeny Murray). He had worked for Tigers during 1956 but was furloughed after that until he was recalled in the early summer of 1961. He went back to Tigers and Dan and I said good by to Jerry. But as fate deals the cards it was about to change for Dan and myself. I decided to drive to Burbank and talk to someone and see if I could be hired on at Tigers. On a rare day offI made it happen and was hired the day I was interviewed. I went home and the next morning at work I told Dan that Tigers was hiring pilots and he should get over there as soon as possible. He did get hired the next day atTigers and the rest of his and my future was tied together at Tigers. From seeing each other in a Douglas facility or in Long Beach or Hawthorne it would be in Tokyo Japan or in Hong Kong or even in Newark New Jersey. Over the years I visited with Dan at his home in Ohio and he introduced me to the N.F.L. Football Hall of Fame museum. In fact there was at one time a Briggs intersection on the sectional chart of the area around the family farm if I remember correctly. Its been so long ago I've forgotten the details of it. I saw Dan at our last reunion in Long Beach. Dan was and is still a special friend and I won't forget him and hope to see him in the cockpit on the last leg west.
Reunions are so important to us and hopefully in202l things will have changed. As we are moving the marker forward and our friends leave for other vistas its important to not forget them in our memories and our lives past.
George Gewehr

Anyone wishing to contribute to this page with archived pictures or testimonials about Dan is encouraged to contact us at email@flyingtigerline.org